Occasionally, I'll receive a surprisingly interesting email or message about a particular project I've worked on. This time, a listener wanted to know more about the songs "Birdsong as Mantra" and "Afterglow" on my latest album Aperus "Archaic Signal". Here's a slightly adjusted version of that exchange. I suggest playing the song (below) while reading this.

I've included this particular piece of art from the album because it summarizes the process of working on "Birdsong as Mantra" - the wavy line represents sound, the black square is a photo of the magnet, and there are strips of the actual tape on the right. There's also bird audio at the very top (gray on red). 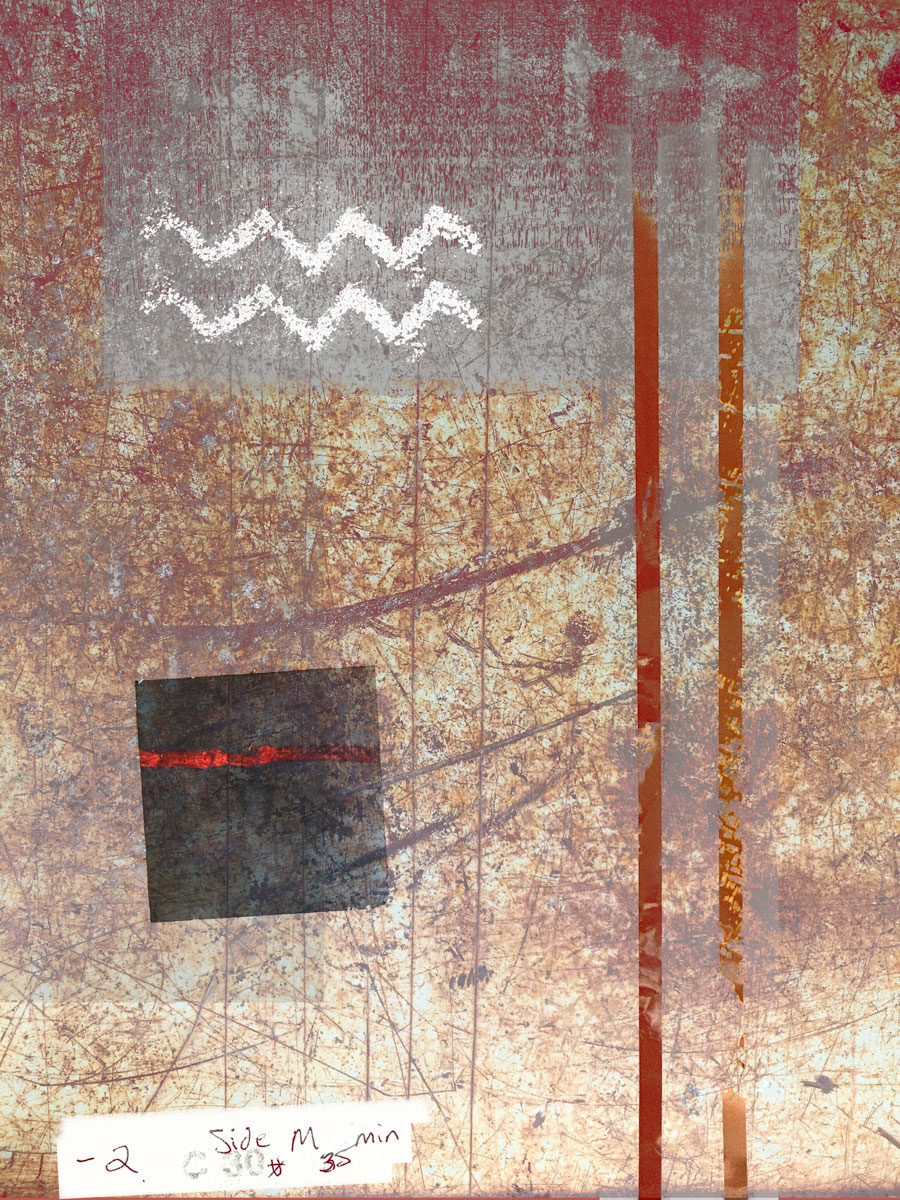 Q: So "Birdsong as Mantra". I just finished listening to it; i was excited when it started because i enjoy music, birds, nature. It was a really interesting experience, an almost visceral emotional reaction. I could listen to that birdsong almost endlessly, because its appealing and has variation. But then it gets distorted and further and further away as time goes on and it is so sad. Like an allegory for all life in nature we are losing over time due to our complicity in destruction, pollution, etc.

Aperus: you have the feeling I was going for. I think this may have been the first song I worked on for the album. For me it was a metaphysical journey from life to death, Tibetan in approach. The slowest build possible with the slowest release possible. It required a great deal of restraint and attention to when specific details show up to keep it developing. Tibetan horns come in the middle and show up throughout the second half. Glad you like this one!

To add the distortion and a gradual sense of distance, I transferred the bird audio onto cassette, scraped the cassette with a knife, stuck scotch tape to it, pulled surface off the tape, crumpled the tape, then experimented with using magnets to erase it. I tried 15 minutes to eight hours of exposure to see what would have the most interesting effect. The hiss at the end of the song was created by leaving a magnet next to the tape overnight. The bird was almost completely erased but it left this repeating loop of hiss and static which I loved. I recorded the cassette back into the song and used that. One more detail about the bird that most people will never figure out is that the album cover shows six phrases of the birdsong loaded into a spectrogram. Some people have asked me where I found the petroglyphs for the cover - I found them in the birdsong.

Q: So i have listened to your album about five times now. Only have a cd player in my truck but that seems to be the best place to listen. I love all your work but was worried i wouldn't like this one so much because it's not as traditionally melodic as the others. But it grew on me. The first time i reached the end of the album i thought well that's a short album, and then the second listen through i realized i was wrong. :-)

I wonder what it's like for you to create? Do you go into as zen a state as listening to it causes?

Aperus: Funny, this is my longest album. I think it's over 63 minutes long. I was in a great creative space making the music on this one. I think because of the experiments I tried and because I kept going to the petroglyph site, returning to work on music and feeling like I was tapping into something that meant something to me. This process felt like a feedback loop.

Usually when I make an album, I'm only happy with part of it. This is the best I've felt about an album at the end and that usually has to do with technical issues or how it sounds to my ears. Here, I feel I got eight songs out of nine right. That's a high number.

Q: Each time i get to "Afterglow" i think, he brought the bird back, it must be uplifting, a sign of hope, pay attention and then i get lost in thoughts and realize the track is over. I really like it.

Aperus: Yes, "Afterglow" also has the bird recorded to cassette, but this time only half erased, so some of the phrases are missing or lower in volume. I'm really glad you like it. The hardest part was panning the birds left and right in specific positions. I spent days putting each call in the place that felt best and not surprisingly, I changed my mind a number of times - but the panning was really important for adding variation.

Q: After you told me about the Tibetan horns i heard them! Love it.

Aperus: Yes, I love the Tibetan horns too. The thing that sounds like a tuba during the second half of "Birdsong" is also a Tibetan horn. On headphones, you can really hear some detail stuff in the bird positions and the deterioration of the tape. I also like the part where the tape gets stuck in the tape deck and everything falls away for about 10 seconds. I decided to leave that part in there.

Q: What a cool process. So the bird was recorded directly to tape?

Aperus: Well, first I recorded the bird directly out the window to my digital recorder. Then I copied the recording to a bunch of cassettes, listening to how it sounded at low, medium and high gain. Then, I tried applying a magnet from 5 minutes to all night long. Finally, when I found the tape I liked best (partially erased), I messed it up by physically damaging it. I really like the sound of the hiss, dropouts, and character it adds through the two songs. Hiss, noise and random color adds a lot to certain styles. It was an interesting process figuring out the right balance! One thing I found out through this process is how resilient tape is. It takes a lot to ruin tape!

Q: So that sound the bird makes when the melody comes down and seems to have a mechanical dissipation, thats from the tape being manipulated?

Aperus: Yes, I damaged it pretty bad, put it back in the tape deck to record it into the composition and the tape got stuck, and made that mechanical noise. The sequencer was still rolling and I had to hit play on the tape deck a few times to get it rolling again. At first I thought I'd have to edit out the dropout and record it again but then I thought why not leave it in there?

Q: Very cool! Thanks for chatting with me about the music and your process!

Aperus: Thanks for the questions! It was fun describing how these two songs came together!