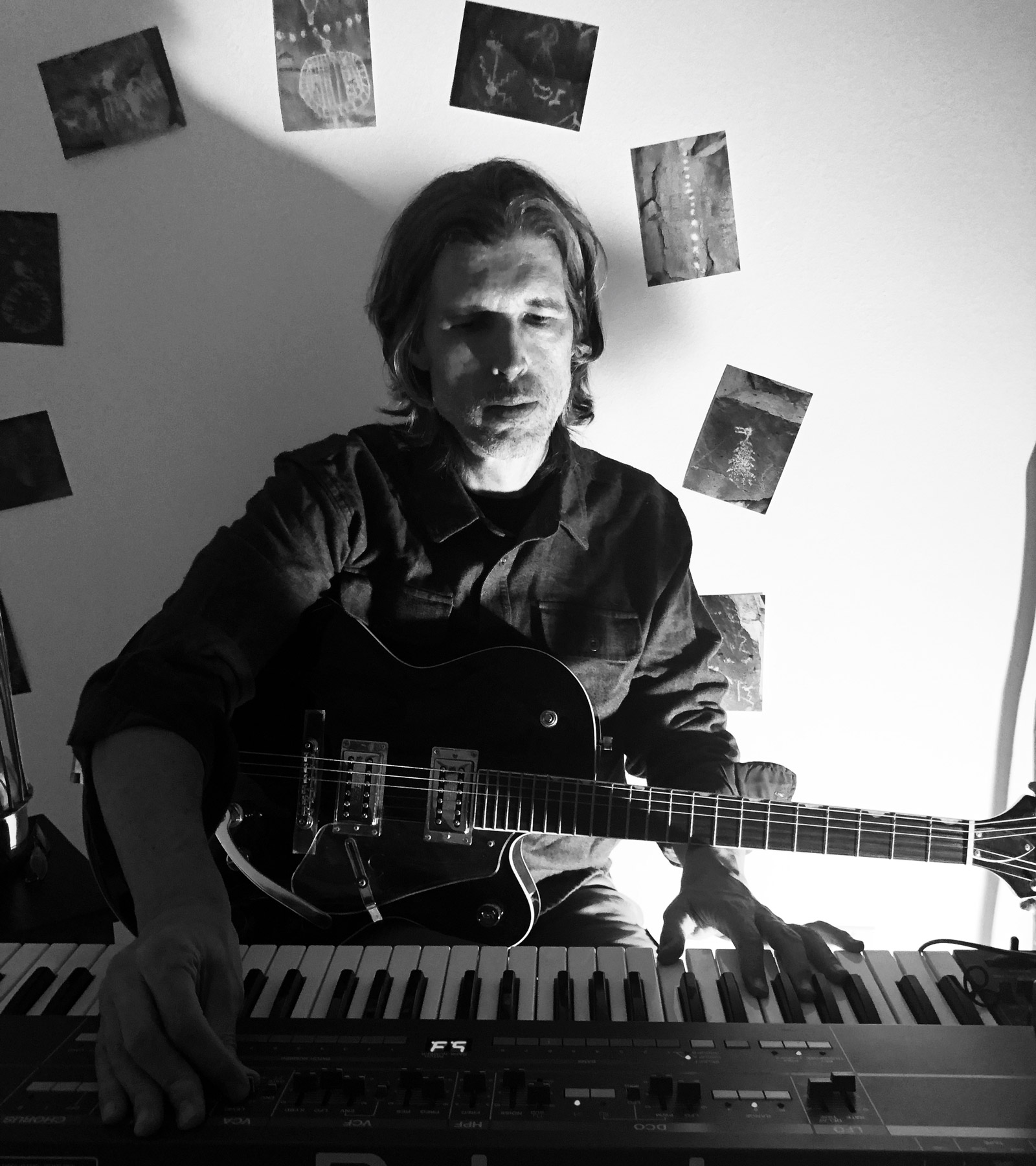 Aperus is an ambient, electronic musician and photographer living in the high desert of northern New Mexico. In addition to his own recordings, he is also known for his work with the highly regarded ambient / electronic duo Remanence.

With each recording, Aperus explores new themes and possibilities, combining analog atmospheres, field recordings, electronic experimentalism and photographic artifacts to create a unique audiovisual experience for the listener. Sounds and images are set up as a feedback loop with photography influencing the music, and music feeding back into the artwork. Approaching his craft with a beginner's mind, each project functions as an experiment where accident and chance are welcomed as valued collaborators. This approach has repeatedly opened new creative doorways and earned him praise with press and listeners.

Work on 'Archaic Signal' began in 2018 with explorations into shortwave radio, field recordings and deliberate manipulation of audio tape to color the sound. The title "Archaic Signal" appeared as a mirage while visiting the La Cienaguilla petroglyph site in northern New Mexico - the images felt like viable signals still holding a charge. This feeling occurred again while listening to birdsong outside of my studio, as if the signal was ancient and current at the same time. Finally, dialing through shortwave radio, I gathered fragments of news reports, number stations, personal messages, and cosmic noise from around the world. Here is my attempt to record and process all of that and deliver it as an audio/visual document.

Using audio language, 'Archaic Signal' is my attempt to respond to unlikely transmissions - both ancient and new - and create a gritty, transportive album that explores a wide range of shimmering sounds and analog artifacts over the course of nine compositions. The album moves from noisier explorations on the opening tracks 'New Antenna' and 'Archaic Signal', into deeper metaphysical territory on 'Canopy of Stars' and 'Birdsong as Mantra', then drifts into calmer tones on closing tracks 'Archaeodreaming' and 'Afterglow'. In short, I hope you'll find the recording rich with subtle textures, low rumblings and warm, evocative atmospheres.

Transmissions from the void, the mantra of birds, ancient glyphs still holding a charge, billions of shimmering white dwarfs... On Archaic Signal, Aperus channels an album of primitive symbolism, universal consciousness, and avant-garde ambient decked out in a beautifully adorned ecopak including five cards of double-sided images resonating with arcane meaning.

The music envelops you, possesses you, and transports you mentally to another dimension, where time has no meaning (and all time has meaning), as if seeing the past through the lens of the future. Each song projects its own aura relying on analog electronics, field recordings, shortwave radio, and experimental methods to create clouds of texture, low rumblings, and shimmering atmospheres. The end result flows from one track to another in a spectacular field of sound, full of layers and character. Without a doubt, "Archaic Signal" will enchant lovers of the ambient, electronic genre and entice anyone who treasures adding the finest musical artifacts to their collection.

For the artwork, I used the camera as a sampler to combine fragments of petroglyphs, drawings and spectrograms with weathered surfaces, metal, and rocks to create a unique series of images. I feel that the artwork is some of my best and features a 5 x 7 matte gatefold sleeve with five double sided photo cards (10 images). 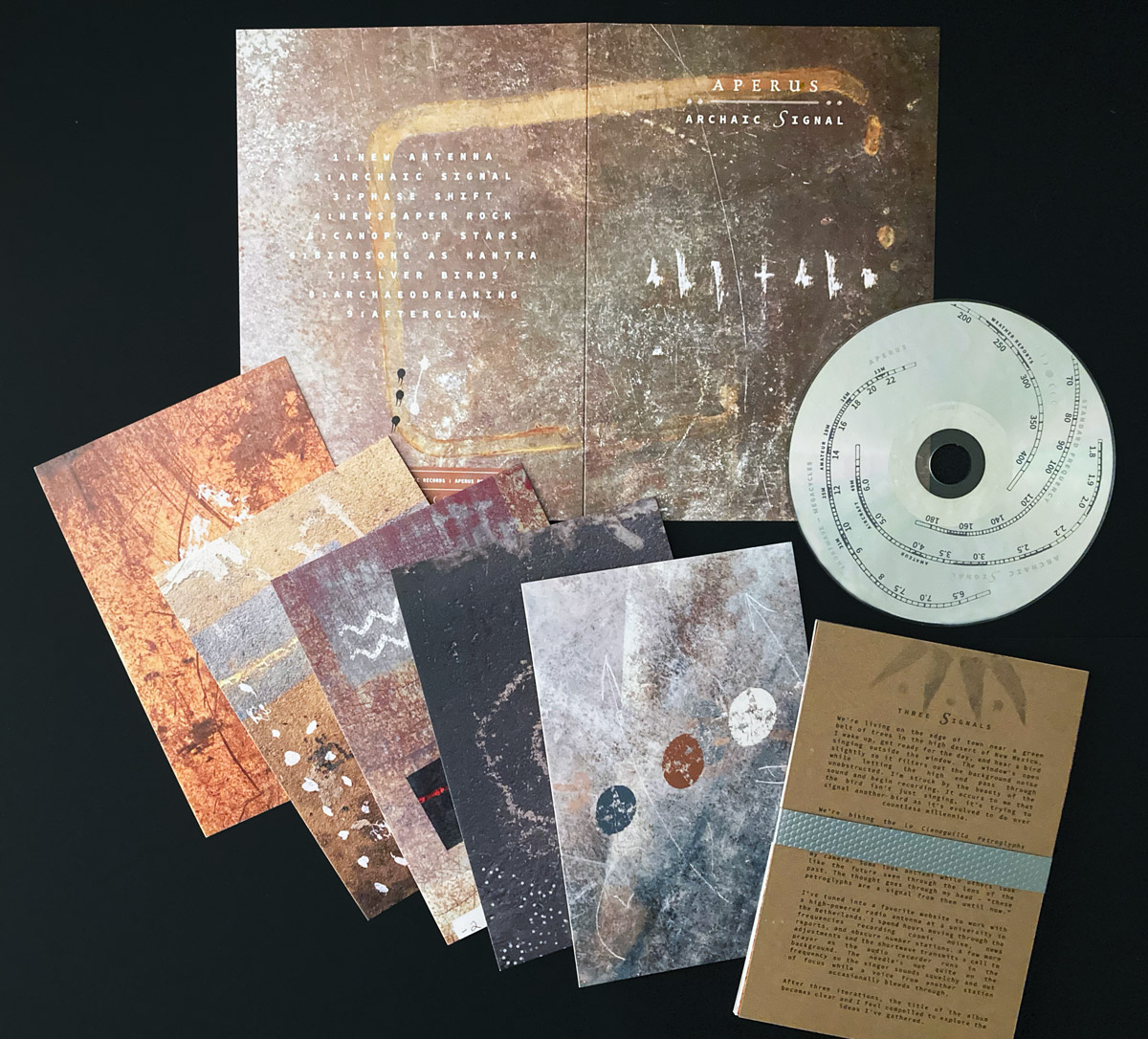 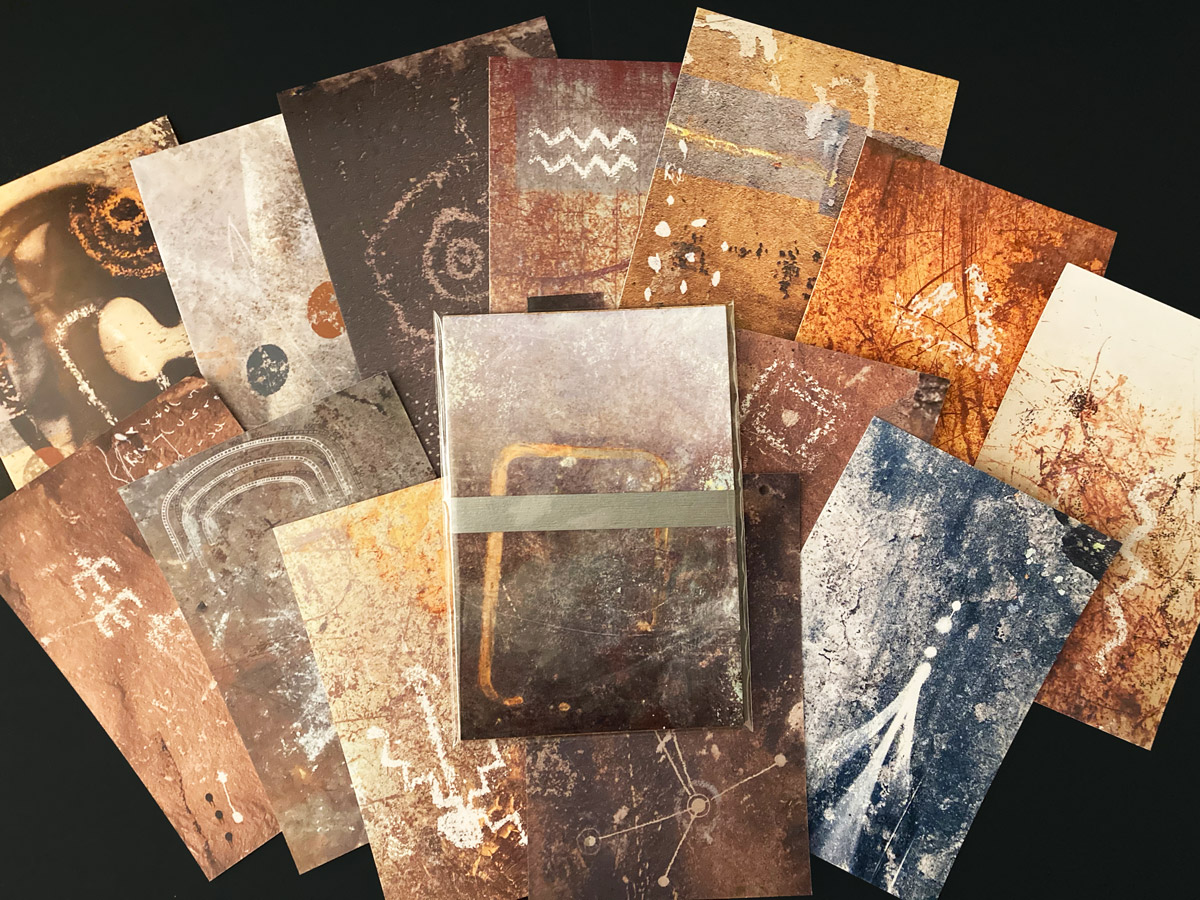 "... an hour of deepest cosmos exploration of uniquely black-holed drones only ever dreamt before, but not heard - with billions of shimmering white dwarfs about... trippy, wonderful space music concrete with a great dose of bliss. Unique stuff with a lot of thought and craft." ~ Eckart Buhler

"... firmly rooted in the world of ambient music ... Sources such as short wave radio give the album a rather nice edge. Aperus takes some time to unfold his musical pieces but succeeds in cooking up some highly atmospheric tunes. From what turns out to be the noisiest piece on the release, the opening 'New Antenna' to the softest at the end, 'Afterglow', this release is quite a trip... Sometimes the synthesizer drifts in a cosmic fashion (sans the arpeggios), such as 'Phase Shift' and sometimes field recordings prevail (in 'Newspaper Rock'). Two pieces are granted a bit of rhythm, which works well in this sparse setting, placing different aspects to a song. Both music and visual approach reminded me of Zoviet*France and that is a good thing. Comes with a fine set of additional cards with images and paintings and that tops off a fine product." ~ Frans de Waard, Vital Weekly

"We're always appreciative when artists go the extra mile, and Aperus has done so literally and figuratively. The artist has translated visits to New Mexico's La Cienaguilla Petroglyph site into music, photography and art, and Archaic Signal is a thoughtful physical edition of his multi-media work... Are the signals getting through? The modern shortwave transmissions have the same effect as old tape loops: both come across as ghosts... The transmission of information [occurs] not only within, but across time... McWilliams practice of listening to every possible voice ~ rock, bird, radio ~ makes him a vessel for the knowledge of the world." ~ Richard Allen, A Closer Listen

"... the conceptual axis around which each of the nine themes that make up this magnificent work revolve are the petroglyphs existing in Santa Fe (New Mexico) in a place called La Cieneguilla. If Lux Atenea cultured readers do a search on Google, the images they will observe will impress them, and they will understand why the ambient style with experimental sonic brushstrokes is perfect and conceptually ideal for the creative avant-garde perspective that Brian McWilliams offers us in this great album... the sound quality that the album presents during its audition is spectacular. You can see the meticulousness and balance in the sound register that has been given to each of these compositions because the music of Aperus envelops you, possesses you, and takes you mentally to another dimension where we lose the notion of the real time in which we live our daily lives... Without a doubt, this edition of the album "Archaic Signal" is visually elegant, and with that hedonistic aura that so attracts non-mainstream music lovers who treasure in their private collections the most beautiful and select editions that have been published. My recommendation of this physical edition to the cult readers of Lux Athena is absolute." ~ Felix V. Diaz, Lux Atenea

Photography and artwork by Brian McWilliams.