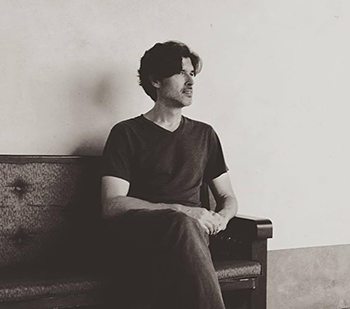 (real name - Brian McWilliams) is an ambient musician and photographer living in the high desert of New Mexico. Also known for his collaborative work in Remanence, he runs Geophonic Records and its imprint Resonant Effects. McWilliams got his start writing and playing bass in the early 90's alternative act "In Autumn". The band wrote and gigged heavily, released one self titled album, then dissolved recording their second.

Shortly afterwards, he and fellow composer John Phipps began recording together as Remanence. Drawing influence from the instrumental work of such diverse artists as David Sylvian, Brian Eno, Robert Rich, In The Nursery, This Mortal Coil, SPK and Lustmord, the duo released a series of albums including ...premonition (1994), Apparitions (2000), Lamkhyer (2002) and a Strange Constellation of Events (2005). All received high praise not only for their content but also their innovative, hand-made packaging which became something of a hallmark for the group, who cited Russell Mills, Zoviet France, and Vaughan Oliver's 23 Envelope as design influences.

Branching out beyond the bounds of the group, McWilliams (now recording as Aperus), released Tumbleweed Obfuscated by Camera Failure (2003) and a year later, the Hinterland EP. Both projects sought to capture the emotion and sense of place found in his landscape photography and field recordings and translate it into an audio / visual experience for the listener. Not surprisingly, chance and accident remained as central themes, while the music incorporated a mixture of emotional colors. Both recordings helped McWilliams further his writing and recording technique as he collaborated with key players such as percussionist extraordinaire Carolyn Kobel and ambient artist James Johnson, who aided in mastering. Both albums received glowing reviews - "...TOBCF captures an artist with a willingness to make mistakes and, as it turns out, to capture moments of often stunning sonic artistry" (e|i Magazine), "from a technical standpoint, the album is textbook perfect. From an artistic standpoint, it has tons of substance and will leave you sated." (Wind and Wire).

After the first Aperus releases, McWilliams contributed music and sound design to a number of independent theatre performances and Matthew Clysdale's film "Frozen Broken". Watching these works from the vantage point of the audience reaffirmed his desire to combine music with other artforms to create a higher emotional connection and lasting experience with the listener.

In 2013, a new collaboration surfaced between sound sculptors James Johnson and Aperus entitled Ecotone, which included both music and photography. Both artists described it as a major milestone in their catalogs, with a number of critics praising it as one of the best environmental ambient albums of 2013 - "an amazing piece of work... The intricacy at work here is stunning" (Hypnagogue), "a beautiful and brilliant release, capturing all the best qualities of each artist and building on their separate gifts to create a truly impressive album" (Ping Things). Shortly after the release of Ecotone, McWilliams reissued Tumbleweed Obfuscated by Camera Failure with updated artwork and photography.

By the end of 2013, McWilliams relocated with his wife from the Midwest to Santa Fe, New Mexico - placing him in the geographic epicenter which inspired much of his creative work. Two years later, he and Phipps reissued an expanded edition of Remanence's Lamkhyer (2015) which they describe as "without a doubt the most elaborate artifact we've ever produced". McWilliams followed it up eight months later with an expanded version of Aperus Hinterland (2016). Both releases play to their strengths, executing sound design, song construction and detailed packaging with a steady hand and clear sense of purpose.

Looking forward, McWilliams continues to record projects as Aperus and in collaboration with Phipps as Remanence. Upcoming releases include archival material and a number of new albums. Musically, both projects remain rooted in the ambient genre, blending environment, sound and presentation as an expression of an emotional audiovisual experience.